skip to main | skip to sidebar

Castaway In My Hometown

Introduction: A Few Steps Later.   I last wrote in this blog back in May, almost 5 months ago. At the time, I was still living in Kansas, driving a big truck with my great friend Terry, and looking forward to moving back to Georgia.

In the weeks leading up to my final departure from Kansas, the night of August 29, I had begun to fall in love with an old acquaintance from high school days, I had a probable job offer from someone that would get me out of the truck as I wanted, and things were looking pretty good to a man about to make a leap into the unknown. I felt Purpose and Possibility guiding my every step.

As I write this, it lacks only one day being six weeks since I left Kansas. In that time, my heart has been broken, the job I thought I had evaporated, and I am a 48-year-old man who is living with his mom for the first time since high school, feeling like a castaway in my own hometown. In many ways, it is a dark time, a confusing time, a depressing time, for me; yet, even so, I am at peace deep below the surface where those storms race across the landscape of my emotions and thoughts. And I know that Purpose and Possibility still guide my every step. I am exactly where and when I am supposed to be, being given the opportunity to learn the lessons of trust, living in the moment, being grateful for what I have, acceptance of what is as that which is exactly the way it is meant to be, even when I don't like it very much.

A very different cruise.   When I was in Texas back in June, my Daddy had called me one night to let me know that our family had a chance to take a cruise together at the end of September. It would be just after I was planning on coming back to Georgia anyway, and the potential for it to be a romantic adventure was in my mind as I joyfully accepted his invitation.

The cruise was wonderful, enjoyable, and I had a great time being around people I love. But it was not the cruise I originally thought it might be: I went alone, in spite of being with others, and it was a time when I was more withdrawn and brooding than I have been in a long, long time. But it was exactly the cruise I needed and the one I was supposed to have.

Richelle and Joseph.   The first full day out in open waters, I was sitting up on the open deck waiting on my Daddy and Hilda. While I was waiting, reading one of the books I had brought (an excellent collection of novellas by Andre Dubus calledWe Don't Live Here Anymore), this couple approached my table and asked if they could join me. Of course, I said. 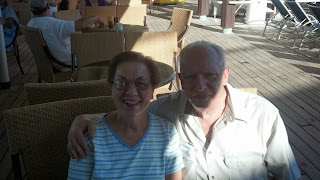 The couple was Richelle and Joseph, and as I heard their story, I realized I had just met two of the reasons I was supposed to be on this cruise. Joseph is originally from Cuba, saw his father shot as a policeman in Cuba when he was a boy, and immigrated to the United States when he was 23 years old. He served several tours in the U.S. Army, and then became a chemical engineer, eventually settling in Orlando, Florida, after he divorced and his children were grown. One of the things he enjoyed most after retiring was cruising – and he did that a lot.

Richelle is originally from Savannah, Georgia, where she lived most of her life. She married her high school sweetheart at age 15, and was with him for 36 years until he passed away of cancer. With no kids or other family, she spent 8 months in Savannah grieving herself literally to death. Finally, as a last resort, a group of her friends bought her a ticket for a cruise, and told her, “You are getting on that boat. You can jump overboard after you leave, or you can get off somewhere and never come back, and you can write us off as your friends, but you are getting on that boat. You are dying here and you have to get away.”

So, about the age I am now, she is forced on a ship for the first time on a cruise she cared nothing about. The first night, assigned seating with other single people at dinner, she sat next to Joseph. After the meal, he asked her if she smoked. Yes, she said. He asked her if she wanted to go up on deck to have a cigarette. Okay, she said. They were together every waking moment the rest of that cruise.

Four days after that cruise, Richelle loaded up some things, including her guns, into her pickup truck in Savannah, and drove to Orlando. Just over a year later, they were married in Las Vegas. That was 18 years ago.

I spent time with them almost every day, soaking up their message to me: don't give up, it's never too late, better days are ahead.
Marlene, Nina, Eleanor, Debbie, Wanda: the Dinner Gang.   The way things were set up for us, we had assigned seating in one of the dining rooms for dinner each evening. That first night, we discovered that our dinner companions for the week were a lovely group of friends (mostly from North Carolina), and the nightly time with them proved to be one of the highlights of the whole week for me. 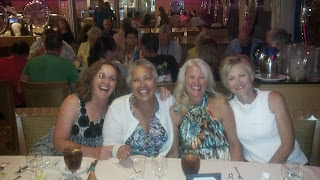 Their contagious joy and laughter was a welcome bright spot in my heart, and I came to feel like I'd known these beautiful ladies a lot longer than a few days by the end of the trip. They were a lifeline to my heart to help me stay connected to joy and light even in a difficult place. In their smiles and laughter and conversation, I found an oasis of strength and hope. Thank you, ladies!

Words from books.   Of course, as I mentioned before, I had taken books along on the cruise. And, even better for being made fun of by my Daddy and others, I even located the library on the ship, and spent time most every day there, enjoying the peace and solitude looking out over the open water casting my thoughts like “bread upon the waters”.

One of the books I took was Looking For Alaska by John Green. The theme of the main character's search for “The Great Perhaps” resonates with my own thoughts about Purpose and Possibility. When his search for love ends tragically, the main character must navigate the waters of how to continue on even when things didn't work out as he had hoped. This book was written for me and this time in my life.

After I finished Alaska, I turned to a volume of poetry I love to read from most days at least a little bit. I re-discovered two poems by Emily Dickinson that spoke to me. I insert them here without comment.

THE Brain is wider than the sky,
For, put them side by side,
The one the other will include
With ease, and you beside.

The brain is deeper than the sea,
For, hold them, blue to blue,
The one the other will absorb,
As sponges, buckets do.

The brain is just the weight of God,
For, lift them, pound for pound,
And they will differ, if they do,
As syllable from sound.
Poem 466.

“ You never know . . .”   Lastly, because it is always so profound in its impact upon my heart, especially in times of uncertainty and searching as I am now in, I share a clip from one of my favorite movies, Cast Away . It is worth watching all of it.

Allan Mills
This is intended to be a journal of my journey with God.

My Favorite Entries From My Old Blog

Peace. (1) The good news -- the gospel -- is that because of the full and finished work of Jesus Christ, God is at peace with me, with you -- with everyone. God is not angry at us; we need not fear his wrath. His anger and wrath were completely and finally poured out upon Jesus and were satisfied; God's justice and holiness were assuaged once and for all; the penalty was paid. God loves us, has chosen us -- indeed, chose us and accepted us in love before the creation of the world in eternity past -- reconciled us to himself. We need only believe this good news, trust it, and accept it, expressing that trust with our mouths, "Jesus is Lord." (See, for example, Isaiah 53-54 where this peace is foretold; Colossians 1:15-23; 2 Corinthians 5:14-21; Romans 5:6-11; Romans 10:9-10 point to its present reality.) (2) When I embrace the fact that God is at peace with me, I experience the peace of God, his salvation. In the Old Testament, the word commonly translated "peace" and in the New Testament the word commonly translated "salvation", "saved" (or any of the variants) connote the idea of wholeness and completeness, and encompass every possible dimension and expression of one's life and person. Much more than just a punched ticket for an eventual heaven. God's intentions, attitude, and expressions toward us are good, only good, always good. Wholeness; completeness; blessing in every single aspect and detail of your life, now and forever. (A simple look at a Strong's Concordance will illuminate this idea for a beginning.)

Offerings. (1) Out of the reality that God is at peace with me, and the fullness of the peace (salvation) I have with God, I offer praise and thanksgiving with my entire being, including words -- including these words. (Romans 12:1-2 and Hebrews 13:15 for example.) (2) These words, this place, also constitute an offering of this peace, a witness of that peace (God is at peace with you; the peace of God, his salvation - completeness, wholeness, blessing - is available to you). God has reconciled you to himself; now be reconciled (believe it, accept it, express it).